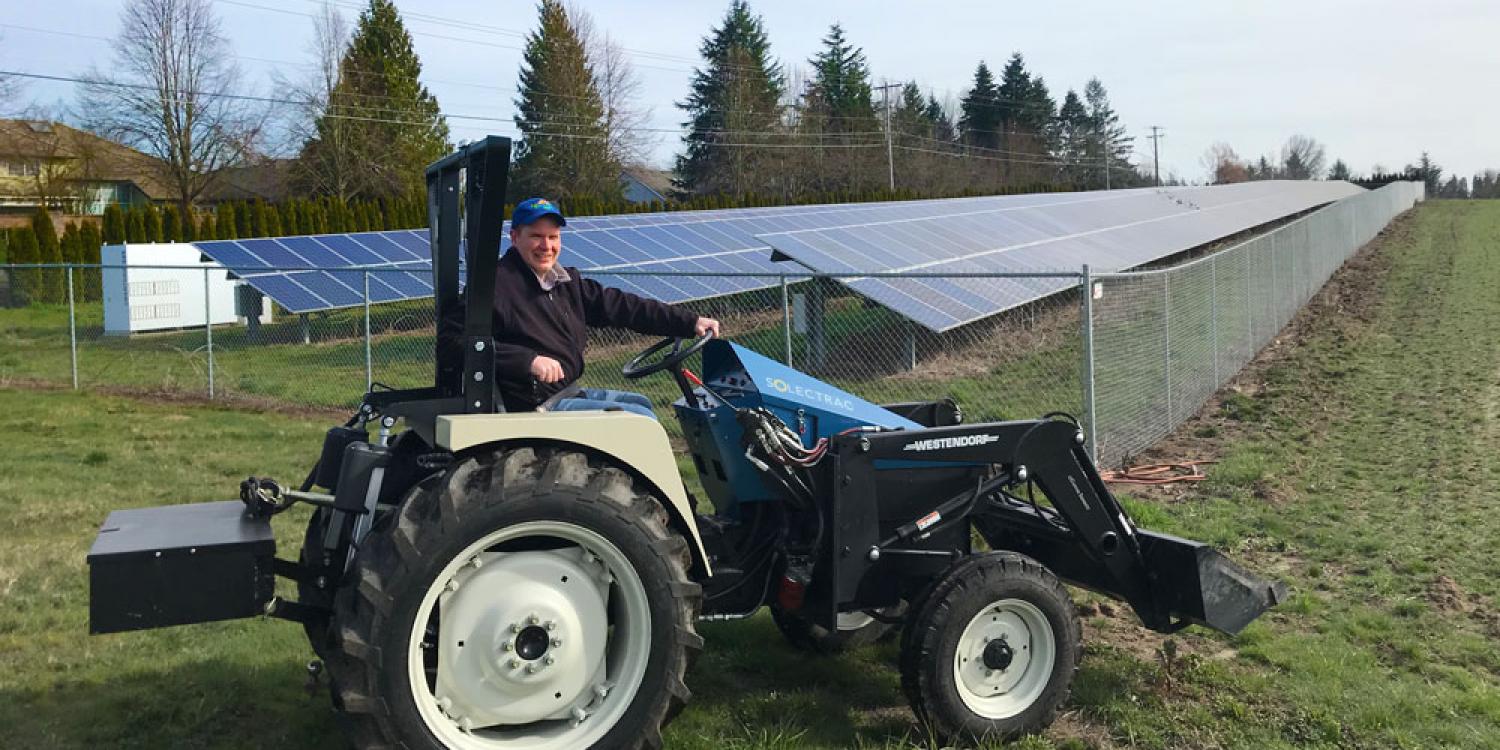 Chad Higgins drives a tractor in front of solar panels installed at the North Willamette Research and Extension Center.

Agrivoltaics is the concept of using arable land to simultaneously grow crops and generate solar power. Co-developing land for both solar photovoltaic power and agriculture could provide 20% of total electricity generation in the United States with an investment of less than 1% of the annual U.S. budget, according to Oregon State University researchers. Further, wide-scale installation of agrivoltaic systems could lead to an annual reduction of 330,000 tons of carbon dioxide emissions in the U.S – the equivalent of 75,000 cars off the road per year – and the creation of more than 100,000 jobs in rural communities, while minimally impacting crop yield, the researchers say.

To prove their concept, the researchers in the College of Agricultural Sciences at OSU are developing an agrivoltaics farm at the North Willamette Research and Extension Center (NWREC), 20 miles south of Portland.

Researchers are also using solar panels installed near the OSU dairy and vegetable farm in Corvallis, collecting data as it grew crops and grazed sheep on land partially shaded by the panels. Chad Higgins, an associate professor in the Department of Biological an Ecological Engineering, has described the promise of agrivoltaics as providing a rare chance for true synergy – more food, more energy, lower water demand, lower carbon emissions, and more prosperous rural communities.

Wide-scale installation of these systems could also open the door for other technologies, such as using solar arrays to power electric tractors or to generate fertilizer at farms rather than transporting it. Inexpensive sensors could be installed on the solar panel platforms to support artificial intelligence-based decisions to improve agricultural productivity.

To further their research, a six-acre farm at NWREC – one of the branches of the Oregon Agricultural Experiment Station – will break ground in early 2022. In the past year, Oregon Clean Power Cooperative, a nonprofit dedicated to community solar projects, has partnered with OSU on a funding model for the project that’s now called Solar Harvest. Primary funders have been OSU and private investors.

Part of the farm’s six acres will be used as a control area to compare data on crops grown on the same soil with or without the partial shade of solar panels. Several crops will be planted – leafy greens previously produced the best results on the OSU campus. Solar panels will be installed higher and further apart than those on the OSU campus, enabling tractors to easily pass under them. Power generation is expected by late 2022 or early 2023.

The plan is for the farm’s electricity to go into the state grid and for OSU to be the anchor subscriber. The farm is expected to produce 700-800 kilowatts of power capacity.